Home > News > What is the Opera House of the Future?

What is the Opera House of the Future? 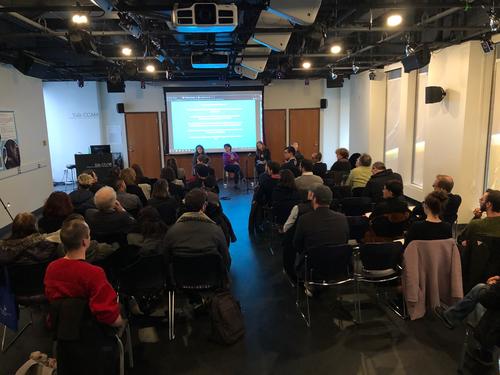 On Friday, January 10th, the Yale School of Architecture, in conjunction with the Center for Collaborative Arts and Media, hosted a public debate which launched the school’s spring semester Advanced Design Studio led by Francine Houben. The talk was led by discussant Ruth Mackenzie, who joins Houben and developer Isaac Kalisvaart in teaching this semester, and included brief presentations by each of the speakers: Mary Lou Aleskie, Wendall Harrington, and Dana Karwas. The discussion centered around the question: how can we (artists, performers, architects) build a more inclusive opera house?

The talk began with a brief overview of the history of the opera as an artistic form, led by Mary Lou Aleskie. While the notion of the opera house first came about in the 16th century, Aleskie reminds us that ‘grand opera’ remains a distinctly 19th century form. Though primarily speaking about the European tradition, Aleskie was careful to point out that some form of opera – defined as a synthesis of musical/vocal performance and visual storytelling – has been a global phenomenon, appearing in some form across every continent and cultural context.

Wendall Harrington opened her presentation with the provocative statement that opera houses exist to exclude. Even the architectural features of the opera house itself reinforce this notion: the viewing boxes themselves are arranged in a way such that audiences not only look at the stage, but also at each other. This exemplifies the performative nature of simply attending the opera, and the ubiquity of elite cultural signifiers donned by audience members remains as much of a barrier to entry as the actual price of the entry ticket. (‘I have nothing to wear to the opera’ was cited by Harrington as a common refrain among people who would otherwise like to attend a performance.)

Dana Karwas followed up with a brief presentation about new and innovative forms of opera, such as the Heartbeat Opera, which is an emerging company that performs in non-traditional settings. She drew on these examples to ask how we can understand the relation between the theatrical set and the architecture of the opera house itself, and by extension, which features remain central and which can evolve.

As the conversation was opened to audience members, a key question arose: what degree of mediation are audiences willing to accept in exchange for accessibility? For example, online streaming services now allow those not in physical attendance to have access to a reproduction of the performance. While online streaming services open up performances for broader audience accessibility, there is the inevitable loss of intimacy – the sense of a shared audience experience. This relationship between accessibility and intimacy was decided to be a key constraint when imagining the opera house of the future.

Aleskie pushed the notion that in the future, opera will begin to rupture certain dichotomies inherent to the classical opera house (e.g. stage|audience, dark|light, curator|viewer). On this topic, Karwas showed a short clip from one of her pieces, Party Dress, in which five women don a massive piece of tent-like fabric and move through a crowd of people. In this piece – which has been described as part performance, part architecture – the distinction between audience and artist is all but nonexistent. The speakers proposed that opera will have to blur such boundaries in order to maintain relevance and attract more diverse audiences.

The event concluded with brief yet stunning operatic performances by Liam Bellman-Sharpe and Camilla Tassi, two CCAM Studio Fellows from the Yale School of Drama.

This article was written by Kaitlyn Fox.