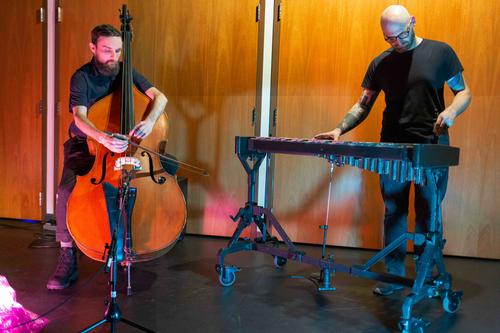 On February 28 and 29, Alvin Lucier (Yale class of 1954) visited the campus as part of the Sound Art Series hosted by the Center for Collaborative Arts and Media. Lucier is an experimental multimedia composer who co-created the legendary audiovisual piece I Am Sitting In A Room (1969) with Mary Lucier. The room in which Lucier is recorded narrating a text participates in the piece by providing resonance which upon being re-recorded distorts the text with each subsequent re-playing until the words become undiscernible. Spatioacoustic exploration is a trademark of Lucier’s works, including those performed in the two shows. 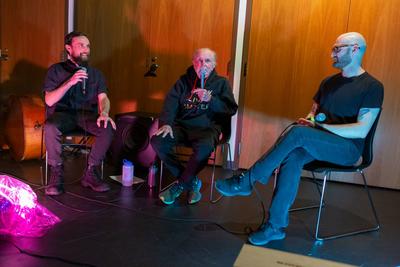 On the first evening, Lucier appeared in Leeds Studio in an iconic Black Lives Matter sweatshirt and opened the show with a discussion of his artistic practice with the curator of the series Ross Wightman. Somewhat unexpectedly for audiences, who know Lucier primarily as a champion of the avant-garde, was the artist’s reference to “L’homme armé,” a late Medieval secular song that was employed in dozens of Renaissance Catholic masses. After Lucier hummed the opening of “L’homme armé,” he explicated that similar to this song’s appearance as a cantus firmus in masses, his compositions employ an unaltered element that is being surrounded by a constantly evolving part.

The first concert featured acoustic instruments and pure electronic sine waves. All three of the concert’s pieces explored the interaction between acoustic and electronic sounds that produced beating, a physical phenomenon that occurs as a result of interference between sounds that are close in frequencies. The electronic waves served as the unaltered element in A Tribute to James Tenney (1987) for double bass and pure wave oscillators, performed by Wightman. By contrast, the oscillators gradually glided up and down in Tilted Arc (2018), performed on bowed glockenspiel by Trevor Saint, as well as in Flips (2020) for bowed glockenspiel, double bass, and slow sweep pure wave oscillators—which received its world premiere performance by Wightman and Saint. 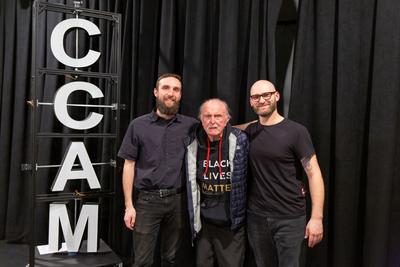 The second show took place at Grey Matter Books and coincided with the celebration of the bookstore’s first birthday in New Haven. The pieces chosen for this concert all explored the relationship between sounds and the physical space where they resound. Saint opened the evening playing Ricochet Lady (2016) for solo glockenspiel. Over the course of the sixteen minutes of this piece, Saint performed short chromatic motives in a steady fast pulse and gradually unfolded the glockenspiel’s entire range from the lowest register to the highest. Midway through this chromatic ascent, the ricocheting of the sounds off the ceiling, walls, and shelves of the room caused the appearance of a new sound layer—a buzzing resonance that increased in intensity and overpowered the actual pitches played on the instrument. 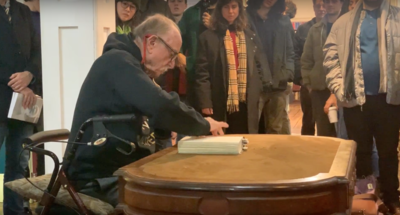 Two pieces that featured non-pitched tapping were Tapper (2004), performed by Conrad Harris on solo violin, and Rare Books (1997), performed by Lucier himself using the biography of E. E. Cummings as his instrument. Tapper featured an unconventional violin bowing: instead of playing the strings with the bow, Harris tapped the body of the violin with the screw at the bottom of the bow. The resultant rhythmic variations acquired acoustic interest as the percussive sounds reflected off the bookstore’s surfaces. Rare Books, similarly explored rhythmic and dynamic parameters that emerged as Lucier tapped his finger against various bookmarked sections of the book. Perhaps more than the other pieces performed on traditional musical instruments, this piece reflects the artist’s commitment to investigating any object’s material properties and sonic capacities. As Lucier said, “I invite some object that I like when I have to make a piece.” As he admitted, an advertisement in a magazine or a book picked up in a bookstore can equally comprise “a beautiful idea for a piece.” The String Noise duo performed the last piece of the show, Halo (2019). Violinists Conrad Harris and Pauline Kim Harris explored the resonant space of the room slowly walking in zigzag patterns and playing long sustained notes on their violins. 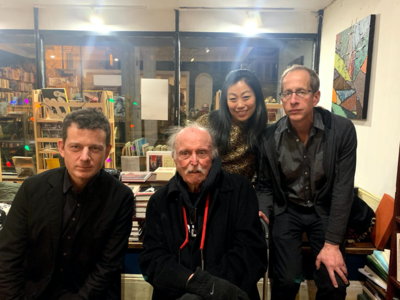 During both of the shows, contemporary music enthusiasts were moved, surprised, and challenged as they set in a room with Lucier—one of the most committed and accomplished visionaries of experimental sound. The E. E. Cummings biography, a book that has revealed its sonic capacities, is most likely still awaiting to be picked up from the shelf at Grey Matter Books as a souvenir from this truly remarkable historic page of Yale’s musical life.