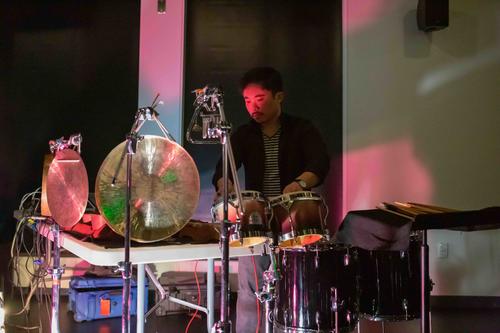 The Levy Lorenzo and Peter Evans Duo inaugurated the Yale Sound Art Series on January 23. Sponsored by the Center for Collaborative Arts and Media and curated by Ross Wightman, the show took place at the Leeds Studio at CCAM and marked the first of the 6 events in the Sound Art Series that will unfold over the course of the Spring 2020 semester. The creative mind behind the series, Wightman, is an experimental improviser, composer, instrument builder, and sound artist who is completing his Masters of Musical Art in double bass performance at the Yale School of Music. When asked what sparked the initiative to curate this series, Wightman said “I have seen many inspiring shows since I have been living in New Haven at venues like Firehouse 12, in local basements, bookstores and other DIY spaces. As I have gotten involved with CCAM I have been thinking about the great potential that Leeds Studio has as a platform for performance. I set out to showcase artists that are innovators in the practice of electroacoustic instrument building, composition, and improvisation.”

The performance was preceded by a conversation between the artists and Wightman. Lorenzo and Evans shared the history behind the formation of their duo: it began with what they described as an “unsuccessful” performance at the 2016 International contemporary Ensemble’s OpenICE commissioning series. Lorenzo is a Filipino-American artist born in Bucharest, who complements percussion performance with his expertise in electrical and computer engineering. Evans is an avid trumpet player and composer based in New York City since 2003. In October 2018, the duo released their debut recording “Q” under Evans’s More is More label. The performers’ individual backgrounds certainly contribute to their unique approach to improvisation that combines playing pre-composed bits with spontaneous spurs and involves innovative techniques of playing trumpets and percussion, as well as intermixing the acoustic realm with sounds emitted from original electronic instruments built by Lorenzo. One of the twists in the discussion was Evans’s response to the question on the role of extended techniques in the duo’s performance practice. Evans stated that he disagrees with interpreting any non-typical playing of the instrument, the trumpet in his case, as a divergence from some normative way of playing. Instead, he sees performance techniques as naturally responding to the demands of ever-transforming artistic practices. The hour-long performance that followed the conversation was an avid demonstration of how timbre interacts with the constantly fluctuating musical ideas of the two performers.

The show began with the musicians exploring a two-note pattern which they built on as the performance progressed. What at first began as an antiphonal duet between trumpet and drums, morphed into sections that seamlessly transitioned between rhythmically driven dynamic techno beats, lyrical melodic interludes, and effects of full-blown orchestral tutti. The familiar trumpet and percussion sounds quickly evolved into an array of unexpected timbres that ranged from eerie drones in extreme bass registers to slurpy smooch noises, from playful bird calls to extraterrestrial electronic rackets. The diversity and richness

of timbres in the continuous piece created by Lorenzo and Evans was truly dazzling. Audience members unfamiliar with the duo were intrigued by being offered ear plugs when entering the venue. But even with the installed octophonic surround speaker system, most listeners did not end up covering their eardrums as they found themselves surrendering to the immersive sound world of the duo.

The upcoming events of the Sound Art Series will include performances by the sound art pioneer Alvin Lucier, who authored the legendary I Am Sitting In A Room. On February 29th at 8pm, Wightman and percussionist Trevor Saint will perform Lucier’s electroacoustic works, including the premiere performance of his newest composition titled Flips for double bass, glockenspiel, and electronics. On the following night, March 1st, the String Noise Duo and Saint will perform Lucier’s acoustic works at Grey Matter Books (264 York Street).

Continuing the series, the composer, performer, instrument designer, and director of the Princeton Laptop Ensemble Jeff Snyder will be featured as the third artist. His piece Opposite Earth, among his other pieces, will be performed by the Yale Laptop Ensemble led by Konrad Kaczmarek on March 3rd at 7:30pm. The following event, on April 5th at 1:30pm, will showcase performances of sound artist, composer, and director of the Columbia Sound Art program, Miya Masaoka featuring members of the Yale Contemporary Players. On April 17th at 7:30pm, the computer scientist, composer, and instrument designer Rebecca Fiebrink will appear in concert with the Yale Laptop Ensemble. Finally, the series will conclude with a performance on April 30th and a lecture on May 1st by George Lewis, composer and experimental performer. This culminating event is co-sponsored by Yale’s Black Sound and the Archive initiative.

All of the sound series events are free and open to the public with registration on Eventbrite.