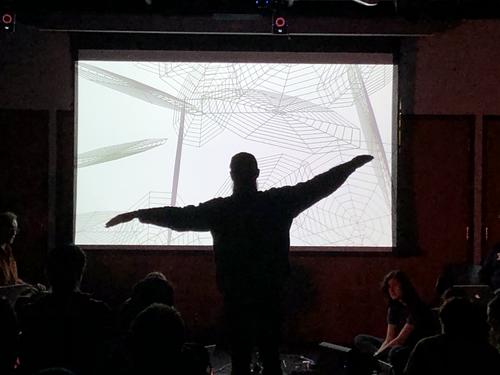 Composer, improviser, instrument builder, and the director of the Princeton Laptop Orchestra Jeff Snyder visited the CCAM on March 3, 2020, as part of the Sound Art Series curated by Studio Fellow Ross Wightman. The Yale Laptop Ensemble, directed by composer and programmer Konrad Kaczmarek, performed Snyder’s Opposite Earth (2016) and premiered Kaczmarek’s own Spinning Plates (2020). The show also featured a premiere of Wightman’s piece written for four Logitech joysticks that were manipulated by Kaczmarek, Snyder, Wightman, and a member of the Laptop Ensemble Roberto Granados (’20). Despite being written by three different artists, all of the pieces in the show shared an affinity to exploring audio-visual correspondences, non-equal temperament tunings, and intersections between improvised and pre-composed music.

As the other events of the Sound Art Series, this show was preceded by a conversation between Wightman and the two artists. Snyder and Kaczmarek addressed the complex relationships between instrument design, composition, and improvisation that emerge during the performances of their electronic works. The audience also witnessed a demo of some of Snyder’s original instruments such as his famous Snyderphonics Manta, a touch-sensor instrument that allows manipulating sound with finger motions after the attack. Snyder also showcased his more recently designed vocoder—a converter that typically transforms human voice into a robotic one. In Snyder’s case, however, the little vocoder box is a true ventriloquist capable of transforming its human creator into a polyvocal, multitimbral puppet. 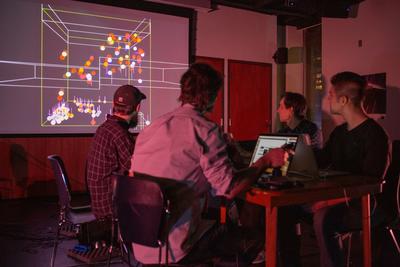 Wightman’s composition employed a physics simulation written in Max/MSP and was rendered using OpenGL to create a space in which 3D spheres are constrained within a 3D box. The colorful whirling spheres were manipulated by the four performers using joysticks and were projected onto the surrealistic geometric space. Wightman jokingly referred to the piece as “Laser Tag II (because Laser Tag Was taken)” and explained its mechanics: “It’s essentially a physics simulation and as the spheres rise on the Z plane that relates to amplitude, their placement along the X and Y planes determines their panning in a quadraphonic spatialization.” The spheres corresponded to the discreet equal subdivision of the octave into 120 microtones. The performers used joysticks to manipulate force fields that sent the spheres around the box. As the spheres rose on the Z plane of the box the amplitude of their associated pitch rose. The clashing and bouncing of the spheres off the corners of the 3D cube simulated sounds that created an impression as if they were in the same space as the audience.

Kaczmarek’s Spinning Plates was performed by the Yale Laptop Ensemble with Wightman as the conductor. The audience viewed a projection of sixteen black spider-web plates spinning on a white background in a vertiginous choreography that resulted from the players’ manipulations of the plates. The sonic accompaniment to these dancing plates included isolated pulsating tones, creaking noises, and detuned harmonies that were based on a chord progression from Radiohead’s “Idioteque.” Although Spinning Plates included a traditional score for the performers, it allowed room for improvisational aleatory as the performers experimented with the rate and amplitude of the tones in their parts. 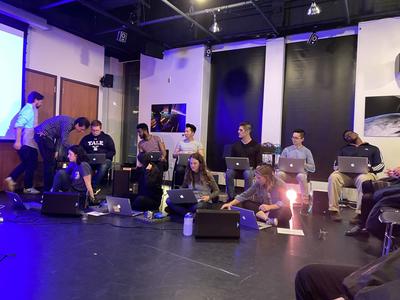 The evening culminated with the performance of Opposite Earth, which was modified from Snyder’s original conception of the piece. Instead of being played by one eight-person ensemble, the piece was performed by two laptop octets conducted by Snyder and Wightman, respectively. The two ensembles followed two visual scores that featured planets crossing eight spinning orbits. Every performer followed an orbit as their score. In addition to generating electronic pitches, the performers produced percussive sounds using woodblocks and everyday objects such as plastic bottles, glass jars, and metal pans. The resulting symphony of ticks, clicks, and bubbly tones created a nocturnal, cosmic atmosphere that captivated the audience with its multisensory effects.

Continuing the Sound Art series, on April 5th @1:30pm, members of the Versicolor—a group of contemporary music players at Yale—will showcase works by sound artist, composer, and director of the Columbia Sound Art program, Miya Masaoka. On April 17th @7:30pm, the computer scientist, composer, and instrument designer Rebecca Fiebrink will appear in concert with the Yale Laptop Ensemble. All events are free and open to the public with registration on Eventbrite.