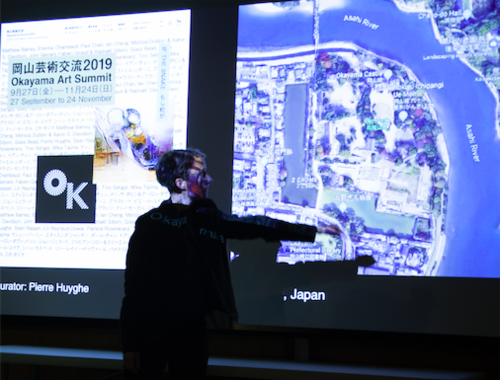 On November 13, 2019, CCAM welcomed computational microbiologist and artist Dr. Elizabeth Hénaff as part of their Wednesday Wisdom series. In attendance were a mix of artists, scientists, and architects, all interested in some aspect of Hénaff’s interdisciplinary presentation on holobiont urbanism and multispecies design.

Hénaff began the event by introducing a project in which she and her team examined how time is perceived differently by different types of organisms. Microorganisms, her main area of study, have very short lifespans and therefore experience time very differently from us. Thus, the team created a non human time clock based on the tidal system off of the coast of Japan. They constructed a set of buoys which filled up with water at high tide, then leaked a small amount, thus registering the height of each tide.

Continuing with this idea of establishing maps to optimize microbial perspectives, Hénaff then spoke about an installation she completed under a commission from the Storefront for Art and Architecture. She and her team sought to explore what environments look like from a microorganism perspective, eventually choosing wood as a material for their project because it is a bio-receptive environment. This wood was then sandblasted, a process in which the softer parts of the wood are carved out first, leaving a 3D relief that reveals the innate structure of the wood. The installation was thus at the same time a work of art and an active science experiment, as Hénaff regularly took DNA samples from the wood to see if preferential selection by the microbes was taking place in a given part of the structure.

The final project that Hénaff presented was one she is currently working on - a study on how green walls and infrastructures effect microbiomes with Anna Dyson and Phoebe Mankiewicz from Yale’s School of Architecture. They are running a pilot study (in the lecture hall of the architecture school) of how exactly we can get microbial information in indoor spaces. In this process, Hénaff is also asking fascinating questions about how the instruments that we use dictate our relationships with microbes, whether consciously or subconsciously.

Hénaff left her audience with a final, compelling hypothesis - that rain dances actually work, due to a particular microbe, Pseudomonas syringae. Clouds occur due to nucleation of ice crystals in the atmosphere, which then becomes rain. According to this theory, rain dances could kick up proteins produced by this microbe because it grows on the surfaces of plant leaves, These proteins are able to nucleate ice crystals at warmer temperatures than those at which nucleation usually happens. Therefore, after days and days of dances, there could potentially be a sufficient amount of this protein in the atmosphere to cause rain. Hénaff used this example to emphasize “how much of our habits, traditions, and rituals are due to interaction with the invisible, but living, microbial world.” We are inevitably linked to this world, and therefore it is now up to us to discover new rituals in our era of multispecies collaboration.

This article was written by Sophia DeVito, a CCAM temporary expert.